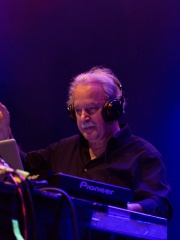 Giovanni Giorgio Moroder (Italian pronunciation: [dʒoˈvanni ˈdʒordʒo moˈrɔːder], German: [mɔˈʁoːdɐ]; born 26 April 1940) is an Italian composer, songwriter, and record producer. Dubbed the "Father of Disco", Moroder is credited with pioneering euro disco and electronic dance music, and his work with synthesizers had a huge influence on several music genres such as Hi-NRG, Italo disco, new wave, house and techno music.When in Munich in the 1970s, Moroder started his own record label called Oasis Records, which several years later became a subdivision of Casablanca Records. He is the founder of the former Musicland Studios in Munich, a recording studio used by many artists including The Rolling Stones, Electric Light Orchestra, Led Zeppelin, Deep Purple, Queen and Elton John. Read more on Wikipedia

Giorgio Moroder is most famous for being a pioneer of electronic dance music. He is also famous for his work with Donna Summer, David Bowie, and Daft Punk.

Among MUSICIANS In Italy