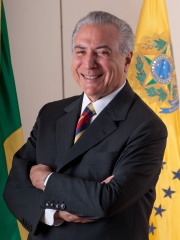 Michel Miguel Elias Temer Lulia (Brazilian Portuguese: [miˈʃɛw miˈɡɛw eˈli.ɐs ˈtemeɾ luˈli.ɐ]; born 23 September 1940) is a Brazilian politician, lawyer and writer who served as the 37th president of Brazil from 31 August 2016 to 31 December 2018 . He took office after the impeachment and removal from office of his predecessor Dilma Rousseff. He had been the 24th vice president since 2011 and acting president since 12 May 2016, when Rousseff's powers and duties were suspended pending an impeachment trial. Read more on Wikipedia

Michel Temer is the current president of Brazil. He became president after Dilma Rousseff was impeached.

Among politicians, Michel Temer ranks 900 out of 15,710. Before him are Pepi II Neferkare, Michael I Rangabe, Charles XI of Sweden, Simeon I of Bulgaria, Lev Kamenev, and Mahathir Mohamad. After him are Vlad II Dracul, Guangxu Emperor, Hassan Rouhani, Barbara of Cilli, Amenhotep II, and Sibylla, Queen of Jerusalem.