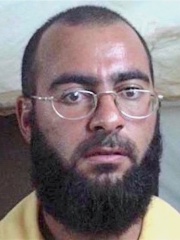 Abu Bakr al-Baghdadi (Arabic: أبو بكر البغدادي‎), born Ibrahim Awad Ibrahim Ali al-Badri al-Samarrai (Arabic: إبراهيم عواد إبراهيم علي محمد البدري السامرائي‎; 28 July 1971 – 27 October 2019), was an Iraqi terrorist and the leader of the Islamic State of Iraq and the Levant (ISIL) from 2014 until his death. Baghdadi was born in or near Samarra, Iraq and obtained graduate degrees in Islamic theology in the late 1990s and 2000s. He joined early Salafi-jihadi groups in Iraq following the US invasion in March 2003 and was detained with Al Qaeda commanders at the American Camp Bucca in 2004. Read more on Wikipedia

Since 2007, the English Wikipedia page of Abu Bakr al-Baghdadi has received more than 10,679,190 page views. His biography is available in 73 different languages on Wikipedia making him the 17th most popular extremist.

Among extremists, Abu Bakr al-Baghdadi ranks 17 out of 182. Before him are Andrei Chikatilo, Ulrike Meinhof, Ramón Mercader, Ed Gein, Man in the Iron Mask, and Abdullah Öcalan. After him are Albert Fish, Ted Kaczynski, Carlos the Jackal, Zodiac Killer, Cleon, and Jim Jones.

Among EXTREMISTS In Iraq

Among extremists born in Iraq, Abu Bakr al-Baghdadi ranks 1. After him are Taha Yassin Ramadan (1938).