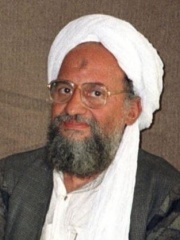 Ayman Mohammed Rabie al-Zawahiri (Arabic: أيمن محمد ربيع الظواهري‎ ʾAyman Muḥammad Rabīʿ aẓ-Ẓawāhirī; born June 19, 1951) is an Egyptian terrorist known for being the leader of terrorist group al-Qaeda since June 2011, succeeding Osama bin Laden following his death, and is a current or former member and senior official of Islamist organizations which have orchestrated and carried out attacks in Asia, Africa, and the Middle East and also some in North America and Europe. In 2012, he called on Muslims to kidnap Western tourists in Muslim countries.Since the September 11 attacks, the U.S. State Department has offered a US$25 million reward for information or intelligence leading to al-Zawahiri's capture. Read more on Wikipedia

Since 2007, the English Wikipedia page of Ayman al-Zawahiri has received more than 4,129,086 page views. His biography is available in 65 different languages on Wikipedia making him the 31st most popular extremist.

Among EXTREMISTS In Egypt