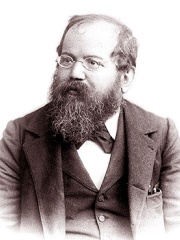 William Steinitz (born Wilhelm Steinitz; May 14, 1836 – August 12, 1900) was an Austrian and later American chess player, and the first official World Chess Champion, from 1886 to 1894. He was also a highly influential writer and chess theoretician. When discussing chess history from the 1850s onwards, commentators have debated whether Steinitz could be effectively considered the champion from an earlier time, perhaps as early as 1866. Read more on Wikipedia

Among people born in 1836, Wilhelm Steinitz ranks 2. Before him is Ramakrishna. After him are Leopold von Sacher-Masoch, Léo Delibes, Lawrence Alma-Tadema, Sophia of Nassau, Marie Henriette of Austria, Francis II of the Two Sicilies, James Tissot, Henri Fantin-Latour, Sakamoto Ryōma, and Ferdinand Cheval. Among people deceased in 1900, Wilhelm Steinitz ranks 5. Before him are Friedrich Nietzsche, Oscar Wilde, Gottlieb Daimler, and Max Müller. After him are Umberto I of Italy, Ivan Aivazovsky, John Ruskin, Étienne Lenoir, Vladimir Solovyov, Alfred, Duke of Saxe-Coburg and Gotha, and John Sherman.

Among CHESS PLAYERS In Czechia