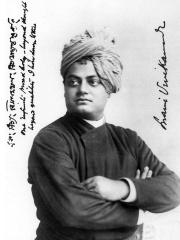 Swami Vivekananda (; Bengali: [ʃami bibekanɔndo] (listen); 12 January 1863 – 4 July 1902), born Narendranath Datta (Bengali: [nɔrendronatʰ dɔto]), was an Indian Hindu monk, philosopher, author, religious teacher, and the chief disciple of the Indian mystic Ramakrishna. He was a key figure in the introduction of Vedanta and Yoga to the Western world; and is credited with raising interfaith awareness, and bringing Hinduism to the status of a major world religion. Vivekananda became a popular figure after the 1893 Parliament of Religions in Chicago, where he began his famous speech with the words, "Sisters and brothers of America...," before introducing Hinduism to Americans. Read more on Wikipedia

Swami Vivekananda was an Indian Hindu monk and a major figure in the introduction of Indian philosophies of Vedanta and Yoga to the Western world.

Among philosophers, Swami Vivekananda ranks 134 out of 1,081. Before him are Mozi, Chanakya, Oswald Spengler, Emanuel Swedenborg, Giambattista Vico, and Bonaventure. After him are Rudolf Christoph Eucken, Baron d'Holbach, Wilhelm Dilthey, John Rawls, Isocrates, and Zhu Xi.