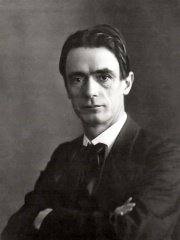 Rudolf Joseph Lorenz Steiner (27 or 25 February 1861 – 30 March 1925) was an Austrian occultist, social reformer, architect, esotericist, and claimed clairvoyant. Steiner gained initial recognition at the end of the nineteenth century as a literary critic and published works including The Philosophy of Freedom. At the beginning of the twentieth century he founded an esoteric spiritual movement, anthroposophy, with roots in German idealist philosophy and theosophy. Read more on Wikipedia

Rudolf Steiner is most famous for his philosophy of anthroposophy. He was a philosopher, architect, and social reformer.

Among philosophers, Rudolf Steiner ranks 70 out of 1,081. Before him are Peter Abelard, George Berkeley, Johann Gottlieb Fichte, Arius, Antonio Gramsci, and Karl Jaspers. After him are Ramakrishna, Epictetus, William of Ockham, Xenophanes, Jürgen Habermas, and Ibn Arabi.

Among PHILOSOPHERS In Hungary