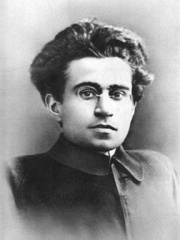 Antonio Francesco Gramsci (UK: , US: ; Italian: [anˈtɔːnjo franˈtʃesko ˈɡramʃi] (listen); 22 January 1891 – 27 April 1937) was an Italian Marxist philosopher, journalist, linguist, writer, and politician. He wrote on philosophy, political theory, sociology, history, and linguistics. He was a founding member and one-time leader of the Communist Party of Italy. Read more on Wikipedia

Antonio Gramsci was a Marxist philosopher and activist who was imprisoned by Mussolini in the 1920s. He is most famous for his theory of cultural hegemony, which explains how the dominant class in society can maintain power by controlling the cultural aspects of society, such as religion, education, and media.

Among philosophers, Antonio Gramsci ranks 68 out of 1,081. Before him are Pliny the Elder, Ludwig Feuerbach, Peter Abelard, George Berkeley, Johann Gottlieb Fichte, and Arius. After him are Karl Jaspers, Rudolf Steiner, Ramakrishna, Epictetus, William of Ockham, and Xenophanes.