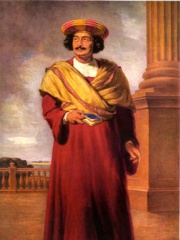 Ram Mohan Roy (Bengali: রামমোহন রায়; 22 May 1772 – 27 September 1833) was an Indian reformer who was one of the founders of the Brahmo Sabha in 1828, the precursor of the Brahmo Samaj, a social-religious reform movement in the Indian subcontinent. He was given the title of Raja by Akbar II, the Mughal emperor. His influence was apparent in the fields of politics, public administration, education and religion. Read more on Wikipedia

Ram Mohan Roy was an Indian reformer and scholar who was instrumental in the social and religious reform movements of the late 18th and early 19th centuries. He was a key figure in the Bengal Renaissance, and has been called "the father of the Hindu Renaissance".

Among philosophers, Ram Mohan Roy ranks 258 out of 1,081. Before him are Jacques Maritain, Franz Brentano, Aśvaghoṣa, Vladimir Solovyov, Prodicus, and Francisco Suárez. After him are Hugh of Saint Victor, Ernst Bloch, Carneades, Nicole Oresme, Alcmaeon of Croton, and Arcesilaus.