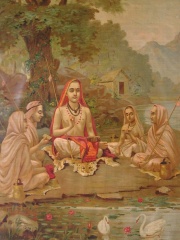 Adi Shankara ("first Shankara," to distinguish him from other Shankaras)(8th cent. CE), also called Adi Shankaracharya (Sanskrit: आदि शङ्कर, आदि शङ्कराचार्य, romanized: Ādi Śaṅkarācāryaḥ, lit. 'First Shankaracharya', [aːdɪ ɕɐŋkɐraːtɕaːrjɐh]), was an Indian Vedic scholar and teacher (acharya), whose works present a harmonizing reading of the sastras, with liberating knowledge of the self at its core, synthesizing the Advaita Vedanta teachings of his time. Read more on Wikipedia

Adi Shankara was a Hindu philosopher and theologian who founded the Advaita Vedanta school of Hindu philosophy. He was born in Kaladi, Kerala, India.

Among people born in 788, Adi Shankara ranks 1. After him are Abd al-Rahman II, Methodios I of Constantinople, Abu Tammam, Ziyadat Allah I of Ifriqiya, and Boniface II, Margrave of Tuscany. Among people deceased in 820, Adi Shankara ranks 2. Before him is Al-Shafi‘i. After him are Leo V the Armenian, Emperor Xianzong of Tang, and Theodore Abu Qurrah.