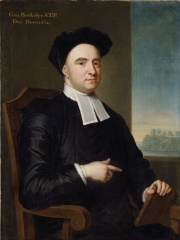 George Berkeley (; 12 March 1685 – 14 January 1753) – known as Bishop Berkeley (Bishop of Cloyne of the Anglican Church of Ireland) – was an Anglo-Irish philosopher whose primary achievement was the advancement of a theory he called "immaterialism" (later referred to as "subjective idealism" by others). This theory denies the existence of material substance and instead contends that familiar objects like tables and chairs are ideas perceived by the mind and, as a result, cannot exist without being perceived. Berkeley is also known for his critique of abstraction, an important premise in his argument for immaterialism.In 1709, Berkeley published his first major work, An Essay Towards a New Theory of Vision, in which he discussed the limitations of human vision and advanced the theory that the proper objects of sight are not material objects, but light and colour. Read more on Wikipedia

Berkeley is most famous for his theory of esse est percipi or "to be is to be perceived."

Among philosophers, George Berkeley ranks 65 out of 1,081. Before him are Mikhail Bakunin, Edmund Husserl, Gorgias, Pliny the Elder, Ludwig Feuerbach, and Peter Abelard. After him are Johann Gottlieb Fichte, Arius, Antonio Gramsci, Karl Jaspers, Rudolf Steiner, and Ramakrishna.

Among PHILOSOPHERS In Ireland