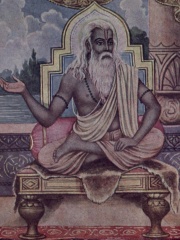 Krishna Dvaipayana (Sanskrit: कृष्णद्वैपायन, romanized: Kṛṣṇadvaipāyana), better known as Vyasa (; Sanskrit: व्यासः, romanized: Vyāsaḥ, lit. 'compiler') or Vedavyasa (वेदव्यासः, Veda-vyāsaḥ, "the one who classified the Vedas"), is a revered sage portrayed in most Hindu traditions. He is traditionally regarded as the author of the epic Mahabharata. Born to fisherwoman Satyavati and the sage Parashara, Vyasa himself fathered the Kuru king Pandu 'under Niyoga practice' in place of a half-brother who died heirless, at the behest of Satyavati. Read more on Wikipedia

Vyasa is most famous for being the author of the Mahabharata, an epic poem which is one of the two major Sanskrit epics of ancient India.

Page views of Vyasas by language

Among philosophers, Vyasa ranks 250 out of 1,081. Before him are Apollodorus of Athens, Ivan Illich, Thomas Carlyle, Theano, Ibn al-Nafis, and Celsus. After him are Orosius, Jacques Maritain, Franz Brentano, Aśvaghoṣa, Vladimir Solovyov, and Prodicus.

Others Deceased in 310 BC