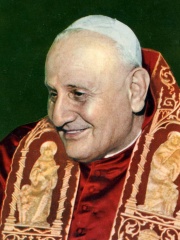 Pope John XXIII (Latin: Ioannes XXIII; Italian: Giovanni XXIII; born Angelo Giuseppe Roncalli, Italian: [ˈandʒelo dʒuˈzɛppe roŋˈkalli]; 25 November 1881 – 3 June 1963) was head of the Catholic Church and sovereign of the Vatican City State from 28 October 1958 until his death in June 1963. Angelo Giuseppe Roncalli was one of thirteen children born to Marianna Mazzola and Giovanni Battista Roncalli in a family of sharecroppers who lived in Sotto il Monte, a village in the province of Bergamo, Lombardy. He was ordained to the priesthood on 10 August 1904 and served in a number of posts, as nuncio in France and a delegate to Bulgaria, Greece and Turkey. Read more on Wikipedia

Pope John XXIII is most famous for his work in the Second Vatican Council.

Among religious figures, Pope John XXIII ranks 41 out of 2,238. Before him are Husayn ibn Ali, Queen of Sheba, James, son of Zebedee, Samuel, Catherine of Alexandria, and Pope John Paul I. After him are Joshua, Judas Iscariot, Ignatius of Loyola, Saul, 14th Dalai Lama, and Mary Magdalene.