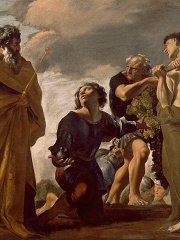 Joshua () or Yehoshua (Hebrew: יְהוֹשֻׁעַ‎ Yəhōšūaʿ‍) functioned as Moses' assistant in the books of Exodus and Numbers, and later succeeded Moses as leader of the Israelite tribes in the Hebrew Bible's Book of Joshua. His name was Hoshea (הוֹשֵׁעַ‎ Hōšēaʿ‍) the son of Nun, of the tribe of Ephraim, but Moses called him "Yehoshua" (translated as "Joshua" in English), the name by which he is commonly known in English. According to the Bible, he was born in Egypt prior to the Exodus.The Hebrew Bible identifies Joshua as one of the twelve spies of Israel sent by Moses to explore the land of Canaan. Read more on Wikipedia

Since 2007, the English Wikipedia page of Joshua has received more than 3,583,307 page views. His biography is available in 57 different languages on Wikipedia (up from 56 in 2019). Joshua is the 42nd most popular religious figure (down from 40th in 2019), the 12th most popular biography from Egypt (down from 11th in 2019) and the 3rd most popular Religious Figure.

Joshua is most famous for leading the Israelites into the Promised Land.

Page views of Joshuas by language

Among religious figures, Joshua ranks 42 out of 2,238. Before him are Queen of Sheba, James, son of Zebedee, Samuel, Catherine of Alexandria, Pope John Paul I, and Pope John XXIII. After him are Judas Iscariot, Ignatius of Loyola, Saul, 14th Dalai Lama, Mary Magdalene, and Pope Gregory I.