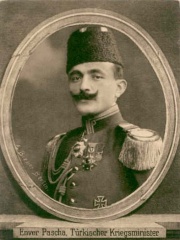 İsmail Enver, better known as Enver Pasha (Ottoman Turkish: اسماعیل انور پاشا; Turkish: İsmail Enver Paşa; 22 November 1881 – 4 August 1922) was an Ottoman military officer, revolutionary, and convicted war criminal who formed one-third of the dictatorial triumvirate known as the "Three Pashas" (along with Talaat Pasha and Cemal Pasha) in the Ottoman Empire. Enver was a member of the Committee of Union and Progress (CUP), a Young Turk organization that agitated against Abdul Hamid II's absolute rule. He was a leader of the 1908 Young Turk Revolution which reestablished the Constitution and parliamentary democracy in the Ottoman Empire, and along with Ahmed Niyazi was hailed as "hero of the revolution". Read more on Wikipedia

Enver Pasha was a Turkish military officer and a leader of the Young Turks. He is most famous for his role in the Armenian Genocide.

Among politicians, Enver Pasha ranks 694 out of 15,577. Before him are Nebuchadnezzar I, Gwangjong of Goryeo, Robert Gascoyne-Cecil, 3rd Marquess of Salisbury, Louis the Stammerer, Albert I of Belgium, and Yuan Shikai. After him are Edvard Beneš, Louis Mountbatten, 1st Earl Mountbatten of Burma, Enrico Dandolo, Childeric III, Henry I of England, and Henry VI, Holy Roman Emperor.