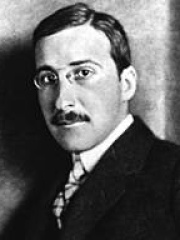 Stefan Zweig (; German: [ˈʃtɛ.fan t͡svaɪ̯k] (listen); 28 November 1881 – 22 February 1942) was an Austrian novelist, playwright, journalist and biographer. At the height of his literary career, in the 1920s and 1930s, he was one of the most widely translated and most popular writers in the world.Zweig was raised in Vienna, Austria-Hungary. He wrote historical studies of famous literary figures, such as Honoré de Balzac, Charles Dickens, and Fyodor Dostoevsky in Drei Meister (1920; Three Masters), and decisive historical events in Sternstunden der Menschheit (1928; published in English in 1940 as The Tide of Fortune: Twelve Historical Miniatures). Read more on Wikipedia

Stefan Zweig was a prolific Austrian writer and journalist. He is most famous for his novel "Beware of Pity" and his autobiography "The World of Yesterday."