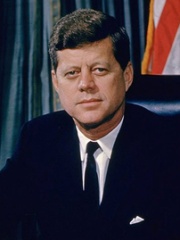 John Fitzgerald Kennedy (May 29, 1917 – November 22, 1963), often referred to by his initials JFK, was an American politician who served as the 35th president of the United States from 1961 until his assassination in 1963. He was the youngest person to assume the presidency by election and the youngest president at the end of his tenure. Kennedy served at the height of the Cold War, and the majority of his foreign policy concerned communist states such as the Soviet Union and Cuba. A Democrat, Kennedy represented Massachusetts in both houses of the U.S. Read more on Wikipedia

John F. Kennedy is most famous for being the 35th president of the United States.

Among politicians, John F. Kennedy ranks 64 out of 15,577. Before him are Martin Van Buren, Josip Broz Tito, Benjamin Franklin, Mehmed the Conqueror, Nicholas II of Russia, and Henry Kissinger. After him are Margaret Thatcher, Caligula, James K. Polk, Mary I of England, Hillary Clinton, and Huang Xianfan.