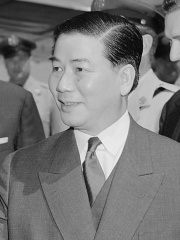 Ngô Đình Diệm ( or ; Vietnamese: [ŋō ɗìn jîəmˀ] (listen); 3 January 1901 – 2 November 1963) was a Vietnamese politician. He was the final prime minister of the State of Vietnam (1954–1955), and then served as President of South Vietnam (Republic of Vietnam) from 1955 until he was captured and assassinated during the 1963 military coup. Diệm was born into a prominent Catholic family, the son of a high-ranking civil servant, Ngô Đình Khả. Read more on Wikipedia

Ngo Dinh Diem was the first president of South Vietnam, and he is most famous for his role in the Vietnam War.

Among politicians, Ngo Dinh Diem ranks 736 out of 15,710. Before him are Alexandra of Denmark, John the Fearless, Hussein of Jordan, Hugo Chávez, Boudica, and Publius Quinctilius Varus. After him are Alexis of Russia, Henry I of England, Zine El Abidine Ben Ali, Cleopatra I Syra, Otto III, Holy Roman Emperor, and Phocas.