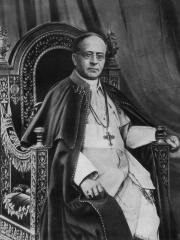 Pope Pius XI (Italian: Pio XI), born Ambrogio Damiano Achille Ratti (Italian: [amˈbrɔ:dʒo daˈmja:no aˈkille ˈratti]; 31 May 1857 – 10 February 1939), was head of the Catholic Church from 6 February 1922 to his death in 1939. He was the first sovereign of Vatican City from its creation as an independent state on 11 February 1929. He assumed as his papal motto "Pax Christi in Regno Christi," translated "The Peace of Christ in the Kingdom of Christ." Pius XI issued numerous encyclicals, including Quadragesimo anno on the 40th anniversary of Pope Leo XIII's groundbreaking social encyclical Rerum novarum, highlighting the capitalistic greed of international finance, the dangers of socialism/communism, and social justice issues, and Quas primas, establishing the feast of Christ the King in response to anti-clericalism. Read more on Wikipedia

Pope Pius XI is most famous for his encyclical of 1931, "Quadragesimo Anno," which called for a new social order based on the principle of solidarity.