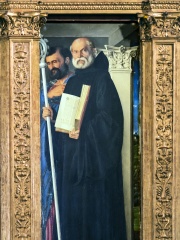 Benedict of Nursia (Latin: Benedictus Nursiae; Italian: Benedetto da Norcia; c. 2 March 480 – c. 21 March 548 AD) is a Christian saint venerated in the Catholic Church, the Eastern Orthodox Church, the Oriental Orthodox Churches, the Anglican Communion and Old Catholic Churches. He is a patron saint of Europe.Benedict founded twelve communities for monks at Subiaco, Lazio, Italy (about 65 kilometres (40 mi) to the east of Rome), before moving to Monte Cassino in the mountains of southern Italy. The Order of Saint Benedict is of later origin and, moreover, not an "order" as commonly understood but merely a confederation of autonomous congregations.Benedict's main achievement, his "Rule of Saint Benedict", contains a set of rules for his monks to follow. Read more on Wikipedia

Benedict of Nursia is most famous for writing The Rule of Saint Benedict, which is a guide for living a Christian life.

Page views of Benedict of Nursias by language

Among religious figures, Benedict of Nursia ranks 48 out of 2,272. Before him are Thomas the Apostle, Husayn ibn Ali, Romulus Augustulus, Samuel, Pope Alexander VI, and Isaiah. After him are Pope Clement VII, Sarah, Pope John XXIII, Saint Valentine, Jerome, and Saint Stephen.