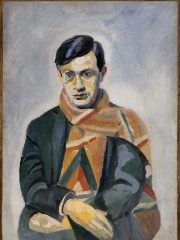 Tristan Tzara (French: [tʁistɑ̃ dzaʁa]; Romanian: [trisˈtan ˈt͡sara]; born Samuel or Samy Rosenstock, also known as S. Samyro; 28 April [O.S. 16 April] 1896 – 25 December 1963) was a Romanian and French avant-garde poet, essayist and performance artist. Also active as a journalist, playwright, literary and art critic, composer and film director, he was known best for being one of the founders and central figures of the anti-establishment Dada movement. Under the influence of Adrian Maniu, the adolescent Tzara became interested in Symbolism and co-founded the magazine Simbolul with Ion Vinea (with whom he also wrote experimental poetry) and painter Marcel Janco. Read more on Wikipedia

Since 2007, the English Wikipedia page of Tristan Tzara has received more than 449,362 page views. His biography is available in 57 different languages on Wikipedia making him the 204th most popular writer.