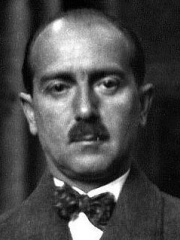 Hans Kelsen (; German: [ˈhans ˈkɛlsən]; October 11, 1881 – April 19, 1973) was an Austrian jurist, legal philosopher and political philosopher. He was the author of the 1920 Austrian Constitution, which to a very large degree is still valid today. Due to the rise of totalitarianism in Austria (and a 1929 constitutional change), Kelsen left for Germany in 1930 but was forced to leave his university post after Hitler's seizure of power in 1933 because of his Jewish ancestry. Read more on Wikipedia

Hans kelsen was most famous for his development of the law of conservation of energy, which states that energy can not be created or destroyed, but rather it is transferred from one form to another.

Among philosophers, Hans Kelsen ranks 147 out of 1,081. Before him are Edith Stein, Jiddu Krishnamurti, Clement of Alexandria, Simone Weil, György Lukács, and Martin Buber. After him are Duns Scotus, Alexander Gottlieb Baumgarten, Kabir, Jean Baudrillard, Herbert Marcuse, and Hippias.

Among PHILOSOPHERS In Czechia