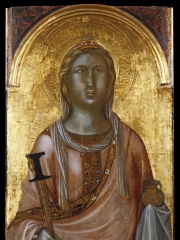 Lucia of Syracuse (283–304), also called Saint Lucia (Latin: Sancta Lucia) better known as Saint Lucy, was a Roman Christian martyr who died during the Diocletianic Persecution. She is venerated as a saint in the Catholic, Anglican, Lutheran, and Eastern Orthodox churches. She is one of eight women (including the Virgin Mary) explicitly commemorated by Catholics in the Canon of the Mass. Read more on Wikipedia

Saint Lucy is most famous for her martyrdom. She was born in Syracuse, Sicily, and she was killed by being beheaded on December 13, 304 AD. She is the patron saint of the blind and those who suffer from eye diseases.

Among religious figures, Saint Lucy ranks 34 out of 2,238. Before her are Samson, Martin of Tours, Jonah, Saint Stephen, John the Apostle, and Pope Benedict XVI. After her are Husayn ibn Ali, Queen of Sheba, James, son of Zebedee, Samuel, Catherine of Alexandria, and Pope John Paul I.