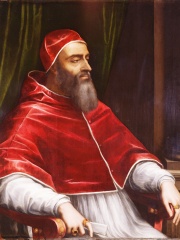 Pope Clement VII (Latin: Clemens VII; Italian: Clemente VII; born Giulio de' Medici; 26 May 1478 – 25 September 1534) was head of the Catholic Church and ruler of the Papal States from 19 November 1523 to his death on 25 September 1534. Deemed "the most unfortunate of the popes", Clement VII's reign was marked by a rapid succession of political, military, and religious struggles—many long in the making—which had far-reaching consequences for Christianity and world politics.Elected in 1523 at the end of the Italian Renaissance, Clement came to the papacy with a high reputation as a statesman. He had served with distinction as chief advisor to Pope Leo X (1513–1521), Pope Adrian VI (1522–1523), and commendably as gran maestro of Florence (1519–1523). Read more on Wikipedia

Pope Clement VII is most famous for being the pope during the time of the Protestant Reformation.

Among religious figures, Pope Clement VII ranks 55 out of 2,238. Before him are Job, Pope Pius XII, Bartholomew the Apostle, Jerome, Anthony the Great, and Anthony of Padua. After him are Luke the Evangelist, Benedict of Nursia, Abu Hanifa, Hildegard of Bingen, Pope Alexander VI, and Thomas the Apostle.