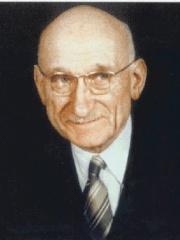 Jean-Baptiste Nicolas Robert Schuman (French: [ʁɔbɛʁ ʃuman]; 29 June 1886 – 4 September 1963) was a Luxembourg-born French statesman. Schuman was a Christian Democrat (Popular Republican Movement) political thinker and activist. Twice Prime Minister of France, a reformist Minister of Finance and a Foreign Minister, he was instrumental in building postwar European and trans-Atlantic institutions and was one of the founders of the European Union, the Council of Europe and NATO. Read more on Wikipedia

Since 2007, the English Wikipedia page of Robert Schuman has received more than 462,198 page views. His biography is available in 59 different languages on Wikipedia making him the 447th most popular politician.

Among politicians, Robert Schuman ranks 443 out of 14,801. Before him are Syngman Rhee, Servius Tullius, Abdullah of Saudi Arabia, Shivaji, Mustafa III, and Hatice Sultan. After him are Valerian, Goliath, Constantius II, Christian VII of Denmark, Tiberius Gracchus, and Zhou Enlai.

Others born in Luxembourg

Among POLITICIANS In Luxembourg