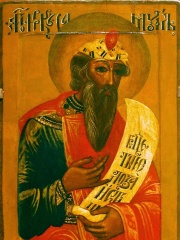 Samuel is a figure who, in the narratives of the Hebrew Bible, plays a key role in the transition from the biblical judges to the United Kingdom of Israel under Saul, and again in the monarchy's transition from Saul to David. He is venerated as a prophet in Judaism, Christianity, and Islam. In addition to his role in the Hebrew scriptures, Samuel is mentioned in Jewish rabbinical literature, in the Christian New Testament, and in the second chapter of the Quran (although Islamic texts do not mention him by name). Read more on Wikipedia

Since 2007, the English Wikipedia page of Samuel has received more than 2,211,620 page views. His biography is available in 57 different languages on Wikipedia. Samuel is the 38th most popular religious figure (up from 45th in 2019).

Samuel is most famous for the book of Samuel, which is the first part of the Bible.

Page views of Samuels by language

Among religious figures, Samuel ranks 38 out of 2,238. Before him are John the Apostle, Pope Benedict XVI, Saint Lucy, Husayn ibn Ali, Queen of Sheba, and James, son of Zebedee. After him are Catherine of Alexandria, Pope John Paul I, Pope John XXIII, Joshua, Judas Iscariot, and Ignatius of Loyola.