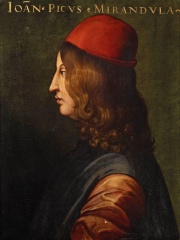 Giovanni Pico della Mirandola (24 February 1463 – 17 November 1494) was an Italian Renaissance nobleman and philosopher. He is famed for the events of 1486, when, at the age of 23, he proposed to defend 900 theses on religion, philosophy, natural philosophy, and magic against all comers, for which he wrote the Oration on the Dignity of Man, which has been called the "Manifesto of the Renaissance", and a key text of Renaissance humanism and of what has been called the "Hermetic Reformation". He was the founder of the tradition of Christian Kabbalah, a key tenet of early modern Western esotericism. Read more on Wikipedia

Giovanni Pico della Mirandola was an Italian philosopher who was most famous for his 900 theses that were published in 1486. The theses were a defense of the Christian faith and an attack on the Aristotelianism that was popular at the time.

Among philosophers, Giovanni Pico della Mirandola ranks 79 out of 1,081. Before him are William of Ockham, Xenophanes, Jürgen Habermas, Ibn Arabi, Friedrich Wilhelm Joseph Schelling, and Jeremy Bentham. After him are Claude Lévi-Strauss, Roger Bacon, Jean Bodin, Nicholas of Cusa, Nagarjuna, and Gregory of Nazianzus.