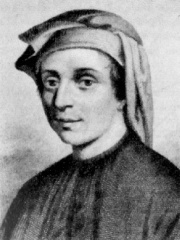 Fibonacci (; also US: , Italian: [fiboˈnattʃi]; c. 1170 – c. 1240–50), also known as Leonardo Bonacci, Leonardo of Pisa, or Leonardo Bigollo Pisano ('Leonardo the Traveller from Pisa'), was an Italian mathematician from the Republic of Pisa, considered to be "the most talented Western mathematician of the Middle Ages".The name he is commonly called, Fibonacci, was made up in 1838 by the Franco-Italian historian Guillaume Libri and is short for filius Bonacci ('son of Bonacci'). However, even earlier in 1506 a notary of the Holy Roman Empire, Perizolo mentions Leonardo as "Lionardo Fibonacci".Fibonacci popularized the Indo–Arabic numeral system in the Western world primarily through his composition in 1202 of Liber Abaci (Book of Calculation). Read more on Wikipedia

Fibonacci is most famous for the Fibonacci sequence, which is a sequence of numbers that starts with 0 and 1. The sequence progresses by adding the previous two numbers to get the next number.

Page views of Fibonaccis by language