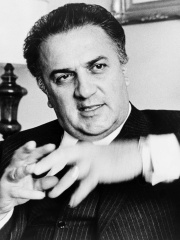 Federico Fellini, (Italian: [fedeˈriːko felˈliːni]; 20 January 1920 – 31 October 1993) was an Italian film director and screenwriter. Known for his distinct style that blends fantasy and baroque images with earthiness, he is recognized as one of the greatest and most influential filmmakers of all time. His films have ranked, in polls such as Cahiers du cinéma and Sight & Sound, as some of the greatest films of all time. Read more on Wikipedia

Since 2007, the English Wikipedia page of Federico Fellini has received more than 1,915,126 page views. His biography is available in 112 different languages on Wikipedia making him the 5th most popular film director.