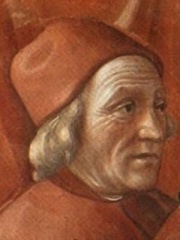 Marsilio Ficino (Italian: [marˈsiːljo fiˈtʃiːno]; Latin name: Marsilius Ficinus; 19 October 1433 – 1 October 1499) was an Italian scholar and Catholic priest who was one of the most influential humanist philosophers of the early Italian Renaissance. He was an astrologer, a reviver of Neoplatonism in touch with the major academics of his day and the first translator of Plato's complete extant works into Latin. Read more on Wikipedia

Marsilio Ficino was a philosopher and physician from Florence, Italy. He is most famous for his translation of Plato's works into Latin and for his commentary on the Hermetic Corpus, which he believed to be a divine revelation.

Among people born in 1433, Marsilio Ficino ranks 2. Before him is Charles the Bold. After him are Stephen III of Moldavia, Ferdinand, Duke of Viseu, Giovanni Giocondo, and Nilus of Sora. Among people deceased in 1499, Marsilio Ficino ranks 1. After him are John Cicero, Elector of Brandenburg, Alesso Baldovinetti, Edward Plantagenet, 17th Earl of Warwick, Stephen Zápolya, Bartolomeo Vivarini, Paulo da Gama, Perkin Warbeck, and Leonardo III Tocco.