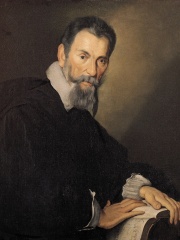 Claudio Giovanni Antonio Monteverdi (, also US: ; Italian: [ˈklaudjo monteˈverdi] (listen); baptized 15 May 1567 – 29 November 1643) was an Italian composer, string player, choirmaster, and priest. A composer of both secular and sacred music, and a pioneer in the development of opera, he is considered a crucial transitional figure between the Renaissance and Baroque periods of music history. Born in Cremona, where he undertook his first musical studies and compositions, Monteverdi developed his career first at the court of Mantua (c. 1590–1613) and then until his death in the Republic of Venice where he was maestro di cappella at the basilica of San Marco. Read more on Wikipedia

Since 2007, the English Wikipedia page of Claudio Monteverdi has received more than 1,173,532 page views. His biography is available in 68 different languages on Wikipedia making him the 19th most popular composer.