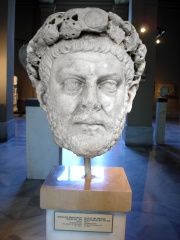 Diocletian (; Latin: Gaius Aurelius Valerius Diocletianus, Ancient Greek: Διοκλητιανός, romanized: Diokletianós; 242/245 – 311/312), nicknamed "Jovius" (Latin: Iovius), was Roman emperor from 284 until his abdication in 305. He was born Gaius Valerius Diocles to a family of low status in the Roman province of Dalmatia. Diocles rose through the ranks of the military early in his career, eventually becoming a cavalry commander for the army of Emperor Carus. Read more on Wikipedia

Since 2007, the English Wikipedia page of Diocletian has received more than 4,110,656 page views. His biography is available in 79 different languages on Wikipedia. Diocletian is the 117th most popular politician (down from 60th in 2019), the 3rd most popular biography from Croatia and the 2nd most popular Croatian Politician.

Diocletian is most famous for being the emperor of Rome from 284-305 AD. He is also known for being the last of the so-called "Five Good Emperors."

Page views of Diocletians by language

Among politicians, Diocletian ranks 117 out of 15,577. Before him are Pepin the Short, Louis XIII of France, Philip II of Macedon, Hatshepsut, Tiberius, and Clovis I. After him are Cyrus the Great, Mustafa I, Murad I, Bayezid I, Otto I, Holy Roman Emperor, and Amenhotep III.