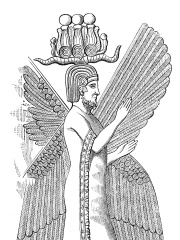 Cyrus II of Persia (c. 600–530 BC; Old Persian: 𐎤𐎢𐎽𐎢𐏁 Kūruš), commonly known as Cyrus the Great and also called Cyrus the Elder by the Greeks, was the founder of the Achaemenid Empire, the first Persian empire. Under his rule, the empire embraced all of the previous civilized states of the ancient Near East, expanded vastly and eventually conquered most of Western Asia and much of Central Asia. Spanning from the Mediterranean Sea and Hellespont in the west to the Indus River in the east, the empire created by Cyrus was the largest the world had yet seen. Read more on Wikipedia

Cyrus the Great was most famous for being the ruler of the Persian Empire from 550 BC to 530 BC. He is also known for freeing the Jews from Babylonian captivity and allowing them to return to their homeland.

Page views of Cyrus the Greats by language

Among politicians, Cyrus the Great ranks 118 out of 15,577. Before him are Louis XIII of France, Philip II of Macedon, Hatshepsut, Tiberius, Clovis I, and Diocletian. After him are Mustafa I, Murad I, Bayezid I, Otto I, Holy Roman Emperor, Amenhotep III, and Lorenzo de' Medici.

Others Deceased in 530 BC