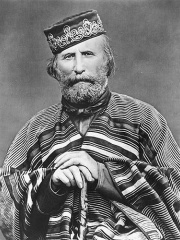 Giuseppe Maria Garibaldi ( GARR-ib-AWL-dee, Italian: [dʒuˈzɛppe ɡariˈbaldi] (listen); 4 July 1807 – 2 June 1882) was an Italian general, patriot, revolutionary and republican. He contributed to Italian unification and the creation of the Kingdom of Italy. He is considered one of the greatest generals of modern times and one of Italy's "fathers of the fatherland", along with Camillo Benso, Count of Cavour, Victor Emmanuel II of Italy and Giuseppe Mazzini. Read more on Wikipedia

Giuseppe Garibaldi was a military and political leader in Italy. He is most famous for his leadership in the unification of Italy.

Among politicians, Giuseppe Garibaldi ranks 93 out of 15,577. Before him are Francisco Franco, Philip II of Spain, George Washington, Heinrich Himmler, Leonid Brezhnev, and Louis XV of France. After him are Henry IV of France, Wilhelm II, German Emperor, Murad IV, Uthman, Mary, Queen of Scots, and Theodosius I.