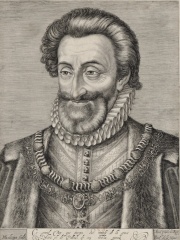 Henry IV (French: Henri IV; 13 December 1553 – 14 May 1610), also known by the epithet Good King Henry or Henry the Great, was King of Navarre (as Henry III) from 1572 and King of France from 1589 to 1610. He was the first monarch of France from the House of Bourbon, a cadet branch of the Capetian dynasty. He was assassinated in 1610 by François Ravaillac, a Catholic, and was succeeded by his son Louis XIII.The son of Antoine de Bourbon, Duke of Vendôme and Jeanne d'Albret, the Queen of Navarre, Henry was baptised as a Catholic but raised in the Protestant faith by his mother. Read more on Wikipedia

Henry IV of France is most famous for being the first Bourbon King of France. He was also a key figure in the French Wars of Religion.

Page views of Henry IV of Frances by language

Among politicians, Henry IV of France ranks 84 out of 15,710. Before him are Mary I of England, Mehmed the Conqueror, Louis XV of France, Osman I, Selim I, and James K. Polk. After him are Margaret Thatcher, Heinrich Himmler, Ashoka, Mary II of England, Hadrian, and Tiberius.