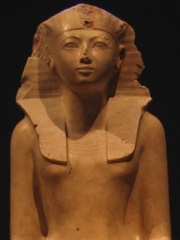 Hatshepsut (; also Hatchepsut; Egyptian: ḥꜣt-špswt "Foremost of Noble Ladies"; c. 1507–1458 BC) was the fifth pharaoh of the Eighteenth Dynasty of Egypt. She was the second historically confirmed female pharaoh, after Sobekneferu. (Various other women may have also ruled as pharaohs regnant or at least regents before Hatshepsut, as early as Neithhotep around 1,600 years prior.) Hatshepsut came to the throne of Egypt in 1478 BC. Read more on Wikipedia

Hatshepsut was the first female pharaoh of Egypt. She ruled for over 20 years and is most famous for her building projects.

Page views of Hatshepsuts by language

Among politicians, Hatshepsut ranks 127 out of 15,710. Before her are Henry V of England, Clovis I, Louis XIII of France, Kösem Sultan, Vespasian, and Cardinal Richelieu. After her are Alfred the Great, Gustavus Adolphus of Sweden, Hermann Göring, Amenhotep III, Ferdinand I, Holy Roman Emperor, and Mehmed III.