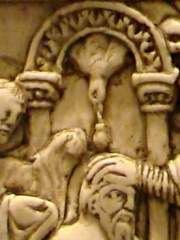 Clovis (Latin: Chlodovechus; reconstructed Frankish: *Hlodowig; c. 466 – 27 November 511) was the first king of the Franks to unite all of the Frankish tribes under one ruler, changing the form of leadership from a group of royal chieftains to rule by a single king and ensuring that the kingship was passed down to his heirs. He is considered to have been the founder of the Merovingian dynasty, which ruled the Frankish kingdom for the next two centuries. Clovis succeeded his father, Childeric I, as a king of Salian Franks in 481, and eventually came to rule an area extending from what is now the southern Netherlands to northern France, corresponding in Roman terms to Gallia Belgica (northern Gaul). Read more on Wikipedia

Since 2007, the English Wikipedia page of Clovis I has received more than 2,012,672 page views. His biography is available in 77 different languages on Wikipedia (up from 75 in 2019). Clovis I is the 122nd most popular politician (up from 139th in 2019), the 6th most popular biography from Belgium and the 3rd most popular Belgian Politician.

Clovis I is most famous for being the first known Native American culture to use the atlatl, a spear-throwing device.

Page views of Clovis IS by language

Among politicians, Clovis I ranks 122 out of 15,710. Before him are Harald Fairhair, Marcus Licinius Crassus, Angela Merkel, Joseph II, Holy Roman Emperor, Otto I, Holy Roman Emperor, and Henry V of England. After him are Louis XIII of France, Kösem Sultan, Vespasian, Cardinal Richelieu, Hatshepsut, and Alfred the Great.