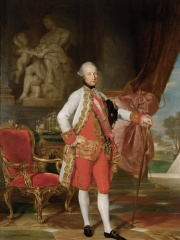 Joseph II (German: Josef Benedikt Anton Michael Adam; English: Joseph Benedict Anthony Michael Adam; 13 March 1741 – 20 February 1790) was Holy Roman Emperor from August 1765 and sole ruler of the Habsburg lands from November 29, 1780 until his death. He was the eldest son of Empress Maria Theresa and her husband, Emperor Francis I, and the brother of Marie Antoinette, Maria Carolina of Austria and Maria Amalia, Duchess of Parma. He was thus the first ruler in the Austrian dominions of the union of the Houses of Habsburg and Lorraine, styled Habsburg-Lorraine. Read more on Wikipedia

Among politicians, Joseph II, Holy Roman Emperor ranks 186 out of 15,577. Before him are Nicholas I of Russia, Orhan, George H. W. Bush, Marcus Licinius Crassus, Kublai Khan, and Alp Arslan. After him are Salman of Saudi Arabia, Donald Trump, Leonidas I, Jawaharlal Nehru, Louis the Pious, and Caracalla.