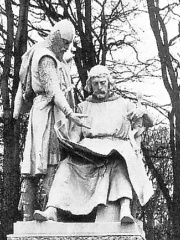 Otto III, nicknamed the pious (1215 – 9 October 1267 in Brandenburg an der Havel) was Margrave of Brandenburg jointly with his elder brother John I until John died in 1266. Otto III then ruled alone, until his death, the following year. The reign of these two Ascanian margraves was characterized by an expansion of the margraviate, which annexed the remaining parts of Teltow and Barnim, the Uckermark, the Lordship of Stargard, the Lubusz Land and parts of the Neumark east of the Oder. Read more on Wikipedia

Page views of Otto III, Margrave of Brandenburgs by language

Among politicians, Otto III, Margrave of Brandenburg ranks 6,529 out of 15,710. Before him are Annia Faustina, John IV, Duke of Brittany, Danilo, Crown Prince of Montenegro, Joseph Darnand, Yevno Azef, and Princess Friederike of Hesse-Darmstadt. After him are Aslan Abashidze, Jean-Pierre Jabouille, Augustinas Voldemaras, Zoltán of Hungary, Maria of Courtenay, and Abu Mahdi al-Muhandis.