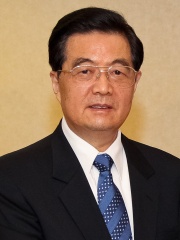 Hu Jintao (born 21 December 1942) is a Chinese politician who served as the general secretary of the Chinese Communist Party (CCP) from 2002 to 2012, the president of China from 2003 to 2013, and chairman of the Central Military Commission (CMC) from 2004 to 2012. He was a member of the CCP Politburo Standing Committee, China's de facto top decision-making body, from 1992 to 2012. Hu was the paramount leader of China from 2002 to 2012.Hu rose to power through the Chinese Communist Party (CCP), notably as Party Committee secretary for Guizhou province and the Tibet Autonomous Region, where his harsh repression of dissent gained him attention from the highest levels. Read more on Wikipedia

Since 2007, the English Wikipedia page of Hu Jintao has received more than 5,628,536 page views. His biography is available in 104 different languages on Wikipedia. Hu Jintao is the 251st most popular politician (up from 301st in 2019), the 15th most popular biography from China (up from 20th in 2019) and the 9th most popular Chinese Politician.

Among politicians, Hu Jintao ranks 251 out of 15,577. Before him are Şehzade Bayezid, Woodrow Wilson, Helmut Kohl, Henry II of France, Philip V of Spain, and António de Oliveira Salazar. After him are Francis I, Holy Roman Emperor, Charles XII of Sweden, Safiye Sultan, Bill Clinton, Leopold I, Holy Roman Emperor, and Antoninus Pius.