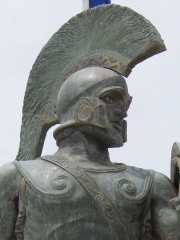 Leonidas I (; Greek: Λεωνίδας; died 19 September 480 BC) was a king of the Greek city-state of Sparta, and the 17th of the Agiad line, a dynasty which claimed descent from the mythological demigod Heracles and Cadmus. Leonidas I was son of King Anaxandridas II. He succeeded his half-brother King Cleomenes I to the throne in c. 489 BC. His co-ruler was King Leotychidas. Read more on Wikipedia

Leonidas I is most famous for leading a small army of 300 Spartans to victory against the Persian Empire at the Battle of Thermopylae.

Page views of Leonidas IS by language

Among politicians, Leonidas I ranks 189 out of 15,577. Before him are Marcus Licinius Crassus, Kublai Khan, Alp Arslan, Joseph II, Holy Roman Emperor, Salman of Saudi Arabia, and Donald Trump. After him are Jawaharlal Nehru, Louis the Pious, Caracalla, Salvador Allende, Klemens von Metternich, and Titus.

Others Deceased in 480 BC