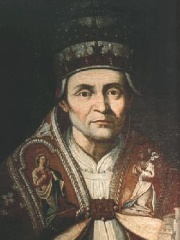 Pope Celestine V (Latin: Caelestinus V; 1215 – 19 May 1296), born Pietro Angelerio (according to some sources Angelario, Angelieri, Angelliero, or Angeleri), also known as Pietro da Morrone, Peter of Morrone, and Peter Celestine, was head of the Catholic Church and ruler of the Papal States for five months from 5 July to 13 December 1294, when he resigned. He was also a monk and hermit who founded the order of the Celestines as a branch of the Benedictine order. He was elected pope in the Catholic Church's last non-conclave papal election, ending a two-year impasse. Among the few edicts of his to remain in force was the confirmation of the right of the pope to resign; nearly all of his other official acts were annulled by his successor, Boniface VIII. Read more on Wikipedia

Pope Celestine V was most famous for resigning from the papacy in 1294.

Page views of Pope Celestine VS by language