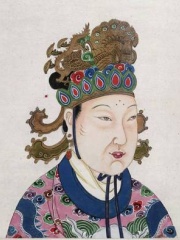 Wu Zetian (17 February 624 – 16 December 705), also known as Wu Zhao or Wu Hou, and during the later Tang dynasty as Tian Hou, was the de facto ruler of China from 665 to 705, ruling first through others and then (from 690) in her own right. From 665 to 690, she was first empress consort of the Tang dynasty (as wife of the Emperor Gaozong) and then, after his death, empress dowager (ruling through her sons Emperors Zhongzong and Ruizong), which had occurred before in China. Unprecedented in Chinese history, she subsequently ruled as empress regnant of the Wu Zhou dynasty of China from 690 to 705. Read more on Wikipedia

Wu Zetian is most famous for being the only woman in Chinese history to rule China.

Among politicians, Wu Zetian ranks 320 out of 15,577. Before her are Haile Selassie, Lee Kuan Yew, Charles VI of France, Ertuğrul, Matthias Corvinus, and Godfrey of Bouillon. After her are Gerhard Schröder, Julian, Abdul Hamid I, Louis XII of France, Edward Heath, and Semiramis.