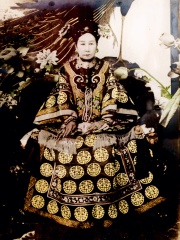 Empress Dowager Cixi (Manchu: ᡥᡳᠶᠣᠣᡧᡠᠩᡤᠠᡤᡳᠩᡤᡠᠵᡳᡳᠯᡝᡨᡠᡥᡡᠸᠠᠩᡥᡝᠣ; Möllendorff: hiyoošungga gingguji iletu hūwangheo, Chinese: 慈禧太后; pinyin: Cíxī Tàihòu [tsʰɨ̌.ɕì tʰâi.xôu]; 29 November 1835 – 15 November 1908), of the Manchu Yehe Nara clan, was a Chinese empress dowager and regent who was the de facto supreme ruler of China in the late Qing dynasty for 47 years, from 1861 until her death in 1908. Selected as a concubine of the Xianfeng Emperor in her adolescence, she gave birth to a son, Zaichun, in 1856. After the Xianfeng Emperor's death in 1861, the young boy became the Tongzhi Emperor, and she became the Empress Dowager. Read more on Wikipedia

Among politicians, Empress Dowager Cixi ranks 212 out of 15,710. Before her are Rudolf Hess, Akbar, Charles X of France, Napoleon II, Emperor Meiji, and William the Silent. After her are James VI and I, Scipio Africanus, Thutmose III, Salvador Allende, Antoninus Pius, and Recep Tayyip Erdoğan.