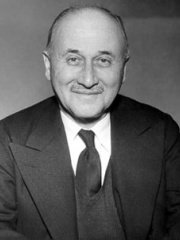 Jean Omer Marie Gabriel Monnet (French: [ʒɑ̃ mɔnɛ]; 9 November 1888 – 16 March 1979) was a French entrepreneur, diplomat, financier, administrator, and political visionary. An influential supporter of European unity, he is considered as one of the founding fathers of the European Union. Jean Monnet has been called "The Father of Europe" by those who see his innovative and pioneering efforts in the 1950s as the key to establishing the European Coal and Steel Community, the predecessor of today's European Union. Read more on Wikipedia

Among politicians, Jean Monnet ranks 1,034 out of 15,710. Before him are Richard Cromwell, Zachary Taylor, Jalal Talabani, Probus, Abdullah I of Jordan, and 5th Dalai Lama. After him are Frederick V of Denmark, Grover Cleveland, Nestor, Stanisław August Poniatowski, Andrew II of Hungary, and Andronikos I Komnenos.