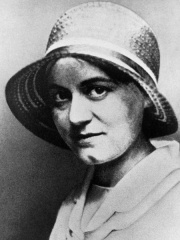 Edith Stein (religious name Saint Teresia Benedicta a Cruce ; also known as Saint Teresa Benedicta of the Cross or Saint Edith Stein; 12 October 1891 – 9 August 1942) was a German Jewish philosopher who converted to Christianity and became a Discalced Carmelite nun. She is canonized as a martyr and saint of the Catholic Church; she is also one of six patron saints of Europe. She was born into an observant Jewish family, but had become an agnostic by her teenage years. Read more on Wikipedia

Edith Stein was a German-Jewish philosopher and a convert to Catholicism. She is most famous for her work on the phenomenology of religion.

Among philosophers, Edith Stein ranks 141 out of 1,081. Before her are Rudolf Christoph Eucken, Baron d'Holbach, Wilhelm Dilthey, John Rawls, Isocrates, and Zhu Xi. After her are Jiddu Krishnamurti, Clement of Alexandria, Simone Weil, György Lukács, Martin Buber, and Hans Kelsen.