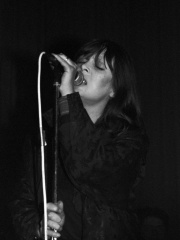 Christa Päffgen (16 October 1938 – 18 July 1988), known by her stage name Nico, was a German singer, songwriter, musician, model, and actress. She had roles in several films, including Federico Fellini's La Dolce Vita (1960) and Andy Warhol's Chelsea Girls (1966). At the insistence of Warhol, she recorded vocals for three songs of the Velvet Underground's debut album The Velvet Underground & Nico (1967). Read more on Wikipedia

Since 2007, the English Wikipedia page of Nico has received more than 2,584,245 page views. Her biography is available in 38 different languages on Wikipedia making her the 36th most popular singer.

Page views of Nicos by language

Most Popular SINGERS in Wikipedia