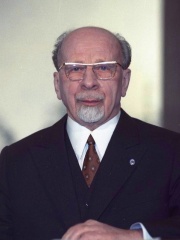 Walter Ernst Paul Ulbricht (German: [ˈvaltɐ ˈʔʊlbʁɪçt]; 30 June 1893 – 1 August 1973) was a German communist politician. Ulbricht played a leading role in the creation of the Weimar-era Communist Party of Germany (KPD) and later (after spending the years of Nazi rule in exile in France and the Soviet Union) in the early development and establishment of the German Democratic Republic. As the First Secretary of the Socialist Unity Party from 1950 to 1971, he was the chief decision-maker in East Germany. Read more on Wikipedia

Walter Ulbricht was the first secretary of the Socialist Unity Party of Germany, and he is most famous for his role in the creation of the Berlin Wall.

Among politicians, Walter Ulbricht ranks 799 out of 15,577. Before him are Shapur I, Robert I, Duke of Normandy, Louis, Duke of Burgundy, Hassan II of Morocco, Isabella II of Spain, and İsmet İnönü. After him are Arthur Wellesley, 1st Duke of Wellington, Zbigniew Brzezinski, Charles II of England, Stanisław August Poniatowski, Paul of Greece, and Valentinian I.