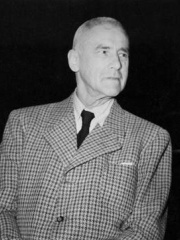 Wilhelm Frick (12 March 1877 – 16 October 1946) was a prominent German politician of the Nazi Party (NSDAP), who served as Reich Minister of the Interior in Adolf Hitler's cabinet from 1933 to 1943 and as the last governor of the Protectorate of Bohemia and Moravia. As the head of the Kriminalpolizei (criminal police) in Munich, Frick took part in Hitler's failed Beer Hall Putsch of 1923, for which he was convicted of high treason. He managed to avoid imprisonment and soon afterwards became a leading figure of the Nazi Party (NSDAP) in the Reichstag. Read more on Wikipedia

Since 2007, the English Wikipedia page of Wilhelm Frick has received more than 606,308 page views. His biography is available in 48 different languages on Wikipedia making him the 761st most popular politician.

Among politicians, Wilhelm Frick ranks 756 out of 14,801. Before him are Louis Antoine de Saint-Just, Anastasius I Dicorus, Vlad II Dracul, Aurangzeb, Felix Dzerzhinsky, and Françoise-Athénaïs de Rochechouart, Marquise de Montespan. After him are Constantine I of Greece, Chaim Weizmann, Roger II of Sicily, Romanos IV Diogenes, Maximilian I Joseph of Bavaria, and Michael I Rangabe.