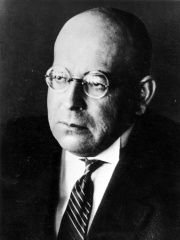 Oswald Arnold Gottfried Spengler (German: [ˈɔsvalt ˈʃpɛŋlɐ]; 29 May 1880 – 8 May 1936) was a German historian and philosopher of history whose interests included mathematics, science, and art and their relation to his cyclical theory of history. He is best known for his book The Decline of the West (Der Untergang des Abendlandes), published in 1918 and 1922, covering all of world history. Read more on Wikipedia

Since 2007, the English Wikipedia page of Oswald Spengler has received more than 804,180 page views. His biography is available in 59 different languages on Wikipedia making him the 121st most popular philosopher.

Among philosophers, Oswald Spengler ranks 119 out of 1,005. Before him are Bodhidharma, Herbert Marcuse, Hans-Georg Gadamer, Aristippus, George Gurdjieff, and Emil Cioran. After him are Ramon Llull, Duns Scotus, Rudolf Christoph Eucken, Eusebius, John Rawls, and Count of St. Germain.